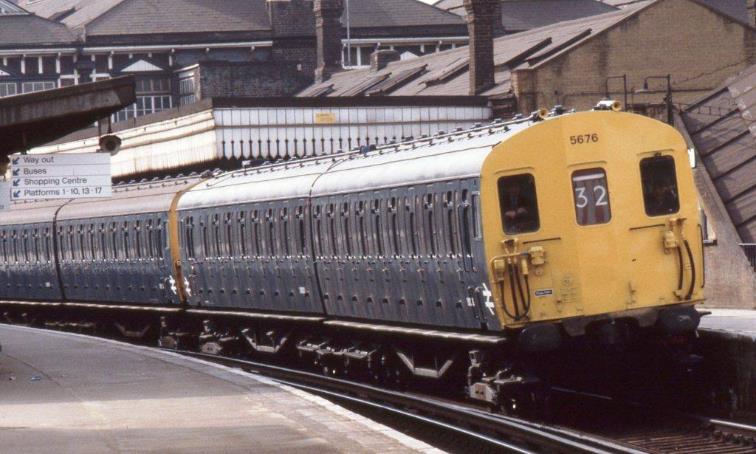 The final phase of the Southern Region’s suburban stock replacement policy involved the withdrawal of the seventy-four remaining 2 NOL units built between 1934 and 1936 using converted former LSWR steam hauled stock mounted on new underframes built at Lancing works. Following withdrawal, the 2 NOL unit bodies were scrapped at Newhaven and the underframes taken to Lancing works for reconditioning and additional strengthening before being transferred to Eastleigh works where their new bodies were constructed.

These two batches of units were both built with car bodies to the SR-style although both were built later than batches of units of the same classes with BR standard bodywork, this being done to fit the bodies onto the slightly shorter SR type underframes. The 2 EPB units were numbered 5651 ‑ 5684 and were built between August and December 1959.

Each consisted of a Motor Brake Second and a Driving Trailer Second. Both cars were 62' 6" long with an overall unit length of 129' 6½". The usual EP brake was fitted and the cars were mounted on standard SR bogies with plain bearings; the motors being to suburban gear ratio. Electrical codes were allocated to these vehicles from new.

Units were close-coupled within, using the standard suburban centre-buffer and three-link chain arrangement: this being bolted with shackles underneath the headstock (keeping the centre-buffer under compression). On cab ends there drop-buckeyes with retractable side buffers and central rubbing-plate. The driving trailer had a centre buffer whilst the motorcoaches had a rubbing plate.

The motorcoaches were virtually identical to those of the SR type 4 EPB units, the only difference being that the passenger accommodation was split into two 4-bay saloons with a central partition, increasing the seating capacity to 84. These vehicles were to diagram no. 2130, the same as that of the SR type 2 HAP units. Motorcoaches weighed 40 tons and driving trailers 30 tons giving an overall weight of 70 tons. Overall seating capacity was one-hundred and seventy-eight.

The driving trailer was a new type of SR vehicle, basically a 10-bay trailer with a driving cab and entrance vestibule replacing one seating bay at the outer end. The resulting 9-bay passenger area was split into a 5-bay and 4-bay saloon, the shorter one outermost, giving a seating capacity of ninety-four. It was to diagram no. 2704. There were no compartments in this batch of units. 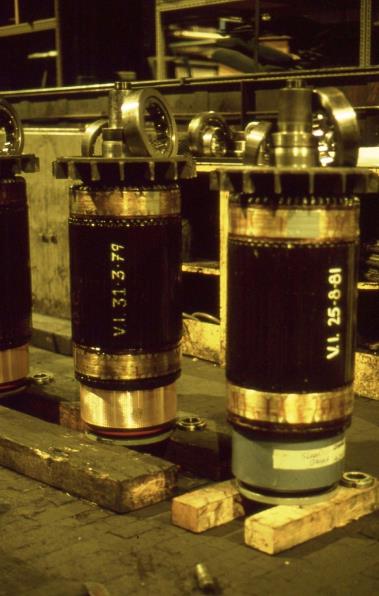 The class number 413 was allocated to these units under the BR TOPS numbering system in 1972, this being revised to Class 416/1 during 1975 and the units were fitted with AWS equipment during the early 1980s. BR design codes were also allocated, the MBS cars becoming EB267.0A and the DTS cars EE262.0A.

Unit nos. 5671 to 5684 remained at Wimbledon Park and were fitted with AWS equipment from 1977, the first three done during mid-1977 with units nos. 5677 /5679 & 5682 having Baldwin AWS control valves, the remainder getting the simplified version. From 24th August 1981 AWS was officially brought into use on the Selhurst based units; the higher numbered units recently transferred from Wimbledon already having this equipment, whilst the lower numbered units were fitted shortly afterwards (nos.5665 & 5667 were not equipped before being taken for facelifting). 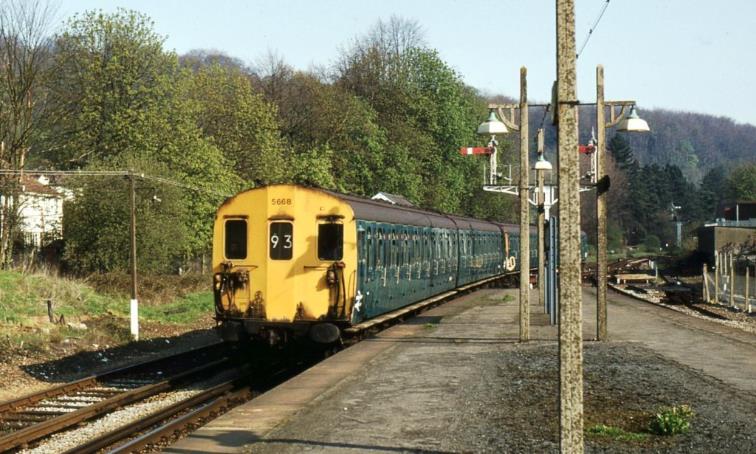 The units entered service during 1959; allocated to the SWD they were used almost exclusively on the Waterloo – Windsor /Weybridge services.

The first nine units entered service from 2nd October 1959, and all were available by early 1960. They then displaced the 4 EPB units which had been temporarily covering these services since May 1957, two-car units giving greater flexibility and allowing some train formations to be reduced to six or four cars whilst still retaining through cars for both portions.

In July 1964 units nos.5651 to 5670 were transferred to Selhurst in in exchange for ex-Tyneside 2 EPB units nos.5781 to 5795 as their all‑open seating arrangements facilitated paytrain fares collection on the Tattenham Corner line; the remainder of the batch followed in June 1981. 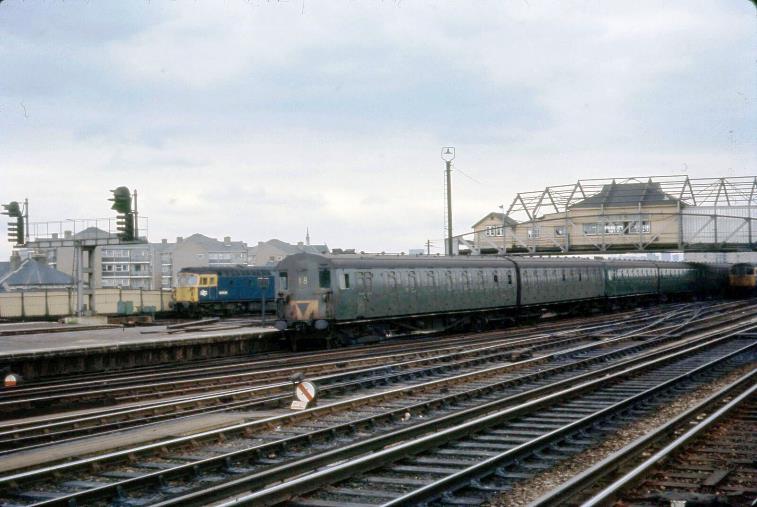 Against the backdrop of Clapham ‘A’ signal box and a push-pull Crompton,
a 2 EPB leads a formation into Clapham Junction’s Windsor Line platforms
©BloodandCustard

All were delivered in all‑over green livery and from 1964-on started gaining yellow warning panels on cab ends, those on motorcoaches having the inverted black triangle to denote there was no brake van at the other end of the unit.

In May 1967 unit no.5681 was the first to be painted into blue livery with full yellow ends; the last to run in green being no.5657 painted blue in February 1970. None appeared in plain blue with yellow warning panels. Where the date of the yellow panel is currently not known (if applied) there is a [#] symbol.

Units were repainted into blue /grey livery in the early 1980s; no.5651 being the first. All units were included in the EPB facelift programme, the first being completed in January 1982 with all being done by May 1985. At this time the units were renumbered (in order of shopping) into a new series 6301 to 6334; class number became 416/3.

Most of the units were facelifted at Eastleigh, though a few were done at Horwich works. During the facelift two internal partitions were removed, both cars now being one large saloon. This reduced the seating capacity of the motorcoaches to eighty-two and the driving trailers to ninety-two, unit total now being on-hundred & seventy-four.

As with the 4 EPB programme in order to reduce costs, the false ceilings were abandoned after completion of unit no.6306; the remainder having the fluorescent lighting fitted in trunking along the car roof with this change being reflected in the amended electrical codes.

Facelifted units were outshopped in blue /grey livery with the unit numbers on cab ends repositioned low down over the cab windows, though most units subsequently received NSE (2) red /white/blue livery (later version, darker blue with curved upsweeps) with no.6308 being the first in February 1989. The two units not already fitted with AWS (nos.5665 & 5667) gained this equipment during facelifting.

All units remained allocated to Selhurst for Central Division services until May 1993 when most were transferred to the South Eastern Division based at Slade Green although a few were withdrawn for scrapping at this time without being transferred. Prior to facelifting, all units retained their original formations. However, one or two facelifted units were reformed with former 4 EPB motorcoaches following to accident damage. 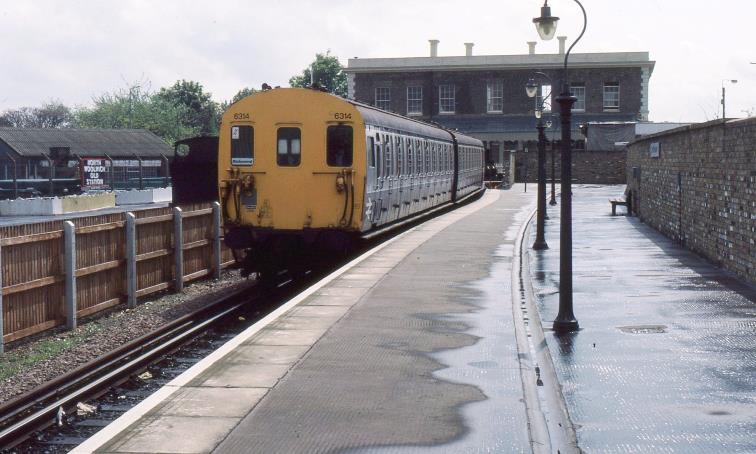 North Woolwich with unit no.6314 awaiting departure to Richmond on 21th May 1985
©John Atkinson

Units nos.6313 to 6327 were fitted with speedometers and window bars (due to reduced clearances through Hampstead tunnel) and of the EPB fleet only these units were permitted on the route; they still remained allocated to Selhurst and were regularly exchanged for maintenance purposes.

Early in May 1985 a few units reached Broad Street prior to the timetable change from 13th May 1985 which saw their route as from Richmond to North Woolwich. A unit was very occasionally ‘borrowed’ to work on the shuttle service from Watford Junction to Croxley Green.

Unit no.6328 was later fitted with window bars in June 1986 to cover for barred units (6321) out of service with accident damage and unit no.6330 was loaned briefly to Slade Green from 16th June 1986 for ‘Eastern Region’ staff training.

From May 1989 a restriction imposed on stock working through Oxted tunnel resulted in all remaining units being fitted with window bars and they ceased working the North London line from 3rd October 1989. All other units were also fitted with speedometers in due course. 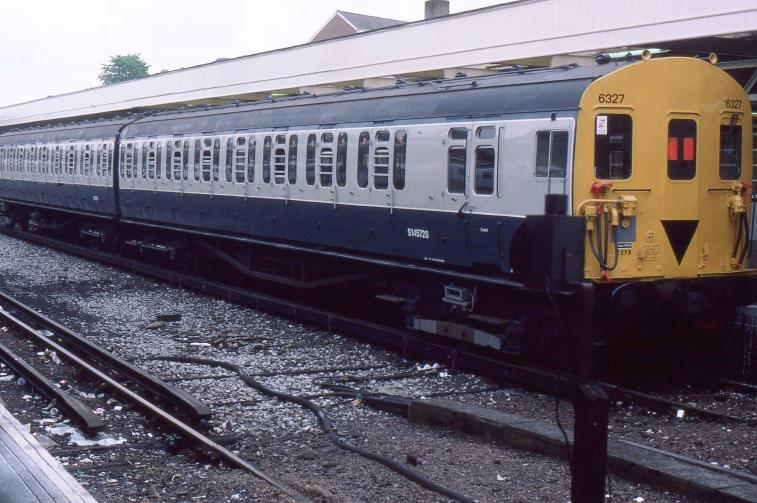 Units started to be withdrawn in numbers during 1993 as deliveries of new Networker Class 465/466 units continued. All units remaining in traffic after 1st April 1994 were transferred to the ownership of the Eversholt train leasing company under the BR privatisation arrangements; these are identified in the facelifted unit formation table with a superscript ‘E’.

Several units survived in traffic to the end of EPB operation in April 1995 with three (6307/8/9) being stored pending possible preservation of some vehicles; no.6307 being at Coventry.

Of the units that were scrapped all went to Gwent Demolition (Margam) except for long-stored units nos.6308 & 6309 which ended up at Sims Metal Management UK Ltd (Newport). 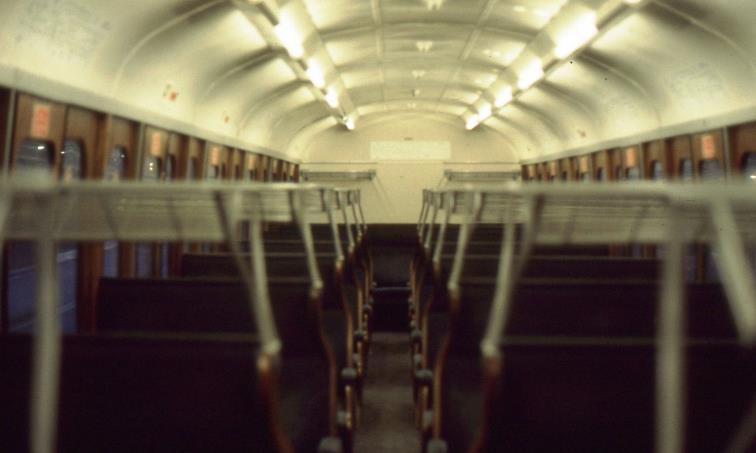 Units fitted with Radio equipment as follows with those done at Eastleigh marked with an [*], the others were undertaken at Selhurst. Date of fitting (if fitted) not known [n/k].

Units fitted with headlamps as follows with those done at Eastleigh marked with an [*], the others were undertaken at Selhurst. Date of fitting (if fitted) not known [n/k]. 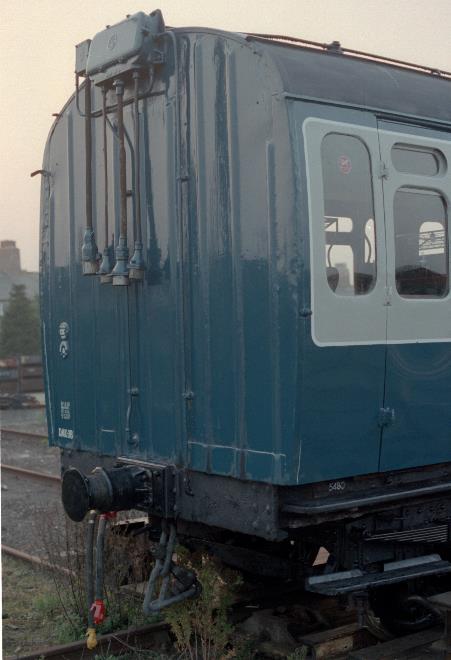 The SR-design 2 EPB was available as a kit from No-Nonsense Kits (based on the MTK range).

ALL TEXT AND PHOTOGRAPHS ARE COPYRIGHT