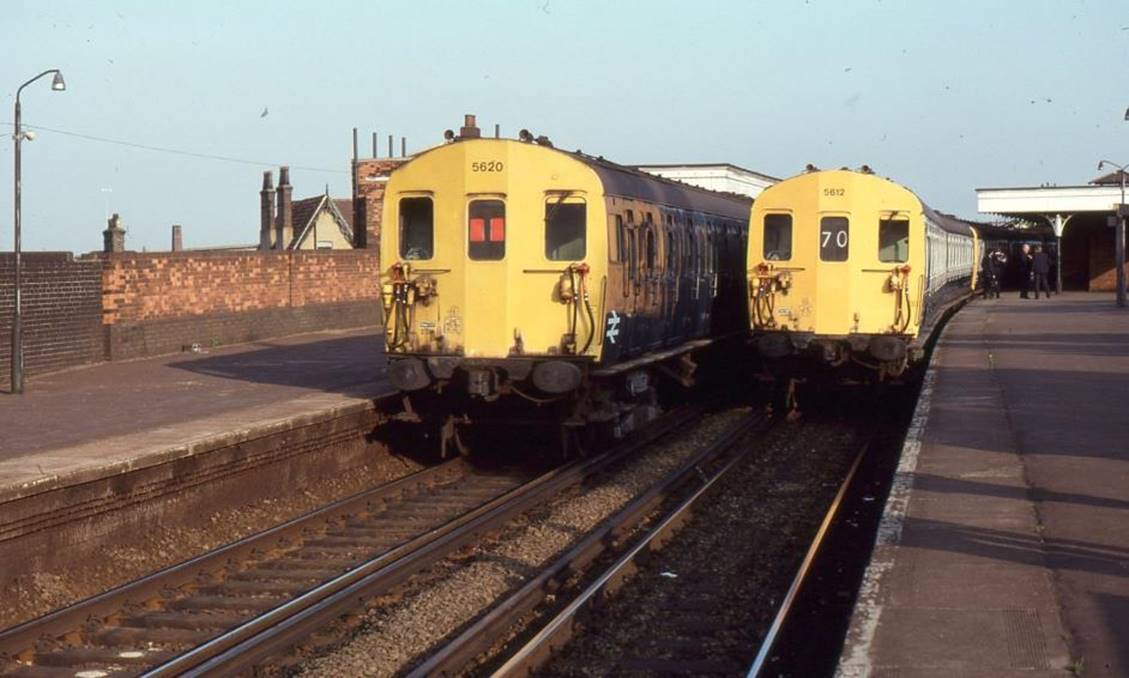 The continuing delivery of new SR type 4 EPB and BR type 2 EPB units during 1956 as part of the ‘10-car scheme’ for the Eastern section suburban lines led to a surplus of 4 SUB units enabling these to take over the whole of the Waterloo – Windsor /Weybridge service in December 1956 displacing the ‘Windsor’ 2 NOL units. Although these 2 NOL units were redeployed working on other Central and Western section suburban services, the condition of their elderly bodies was causing concern leading to many being withdrawn from April 1957. Again, their duties being covered by 4 SUB units as further 4 EPB deliveries allowed these units to take-over the Windsor /Weybridge service from 5th May 1957. The withdrawn 2 NOL units then had their bodywork scrapped.

The bodywork of these 2 NOL units had been converted from former LSWR steam hauled stock built between 1894 - 1902 and mounted on underframes built new at Lancing works in 1934‑6. The old 2 NOL bodies were stripped off these underframes and scrapped at Newhaven with the underframes then being used as the basis for new 2 EPB /2 HAP vehicles; the bodies being constructed at Eastleigh works during 1957 (36 no. 2 HAP units) and 1959 (34 no. 2 EPB units). Stripped underframes were reconditioned at Lancing works and additional strengthening was added prior to them being taken to Eastleigh works for re-bodying.

Seventy-four 2 NOL units were still running by 1956 and HOO 4281 (Head Office Order) dated 12th April 1956 covered the conversion of all of their underframes following body removal and construction of new all-steel SR-pattern bodies and new electrical equipment to the current ‘1951 type’ standards. Underframes from four units were used in the final stages of the 4 EPB construction program, leaving those of seventy others for new two-car units and HOO 4281 provided for thirty-six 2 HAP units and thirty-four 2 EPB units. 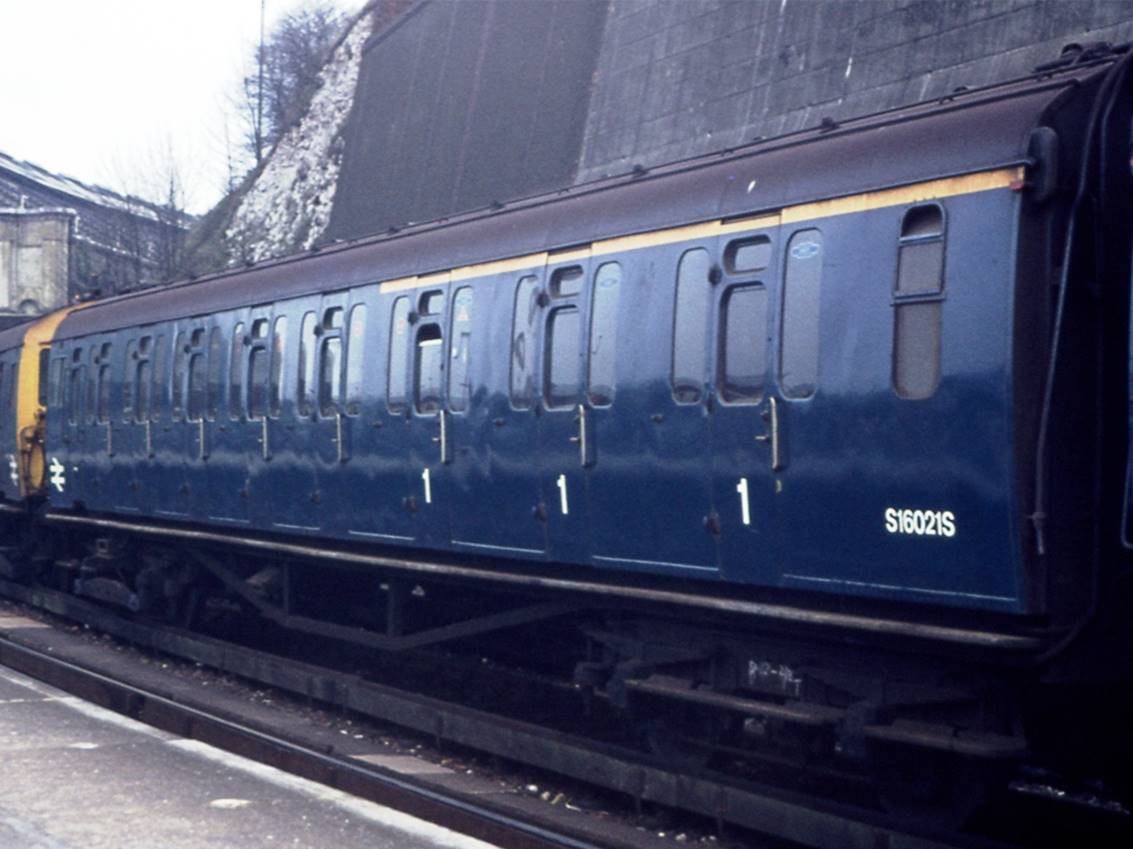 Thirty-six of these new units entered service in 1958 as 2 HAP units numbered 5601 - 5636. They had bodywork to the ‘SR’ pattern (similar in style to that of the SR 4 EPB units) and were in many ways an updated version of the ‘all-steel’ 2 HAL units as the bodystyles and layout of the DTCs were similar. The driving trailer composite was 62' 6" long, weighed 32 tons and consisted of a driving cab (with standard 1951 type 4 EPB cab end design) entered from a vestibule behind. Then followed a full-width coupe compartment seating six, four full second-class compartments each seating eight, three first-class compartments each seating six and a lavatory at the inner end of the coach. The seven full compartments were joined by a side corridor (on the offside when the DTC was leading) and this led straight into the coupe through a swing door. It was to diagram number 2703.

There was no access between the DTC and MBS, which were coupled by the three-link coupling and centre-buffer arrangement. The motor brake second was very similar to those of the 4 EPB units, but a central partition divided the passenger accommodation into two 4-bay saloons giving a seating capacity of 84. This coach was also 62' 6" long, weighed 40 tons and was to diagram number 2130. It was equipped with two 250hp EE507 motors fitted with express gear ratio as the units were to be used with the BR type 2 HAPs and 4 CEPs on secondary main line services. The units were mounted on standard SR bogies with 8' 0" wheelbase at inner ends of coaches and 8' 9" wheelbase under cabs (with plain bearings) and were 129' 6½" long, weighed 72 tons and seated 18 first and 122 second class passengers. Units 5611 upwards were built with fibreglass doors fitted to the MBS vehicle. This is possibly the reason why unit 5611 was built as 5608 and renumbered prior to entering traffic. Electrical codes were allocated to each vehicle from new. 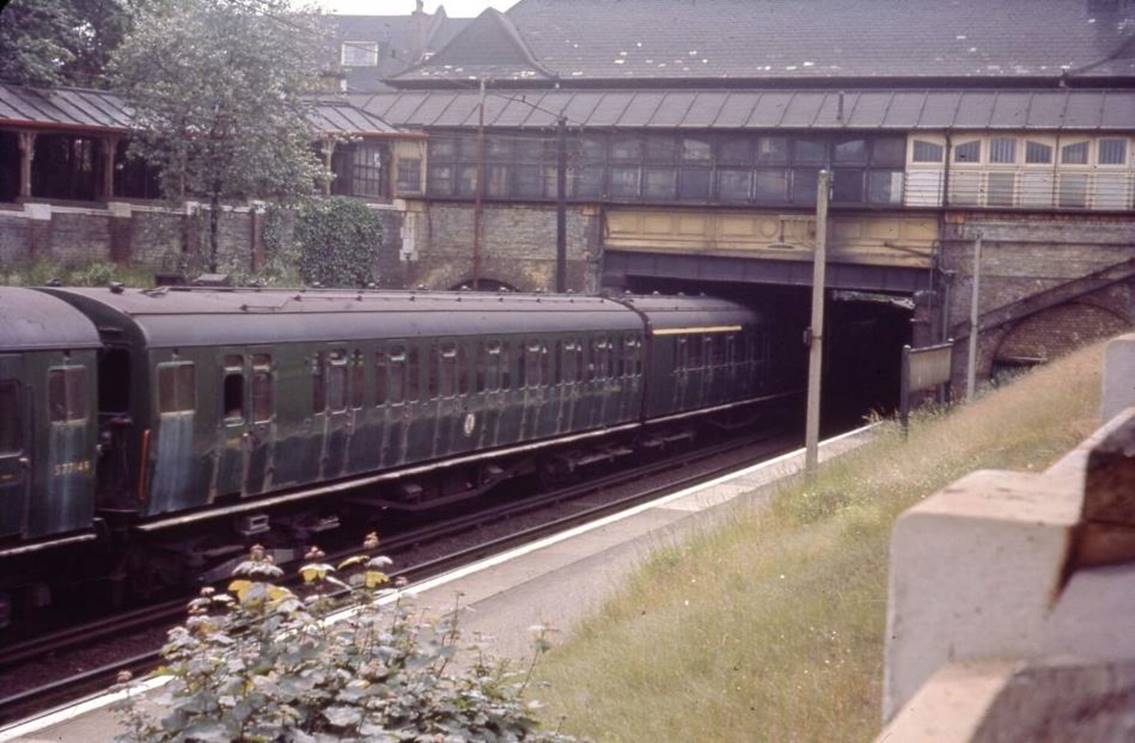 The first five units delivered late in 1957 were stored briefly until used, in conjunction with about eighteen of the BR type units to cover peak-hour services on the Eastern section, mostly between Holborn Viaduct /Cannon Street and Sevenoaks from February 1958. By 14th April sufficient BR type units were available to enable the all-day services from Charing Cross to Gillingham to be converted to 2 HAP and the displaced 2 HAL units then moved to the Central and Western sections, some for the enhanced Gatwick Airport service whilst others displaced the ‘Coastal’ 2 NOL units into the suburban area to enable the last of the ‘Windsor’ 2 NOLs to be withdrawn.

Units from 5606 upwards started to be delivered from mid-June and all units of this batch had been delivered by the mid-November 1958, working with the BR ‘1951 type’ units covering the services from London to Gillingham and Maidstone. Following completion of both phases of the Kent Coast electrification scheme they extended their operational area considerably, becoming common-user with the later built BR type 2 HAP units and covering all the electrified lines in Kent.

Units were delivered in all-over (darker) green livery and from January 1964 started to receive small yellow warning panels on cab ends, although units nos.5602 /5604 /5605 /5616 /5618 gained full-yellow ends at Selhurst whilst still green. Units started to be painted all-over blue from 1966 with four units (nos.5608 /5610 /5614 & 5617) receiving the intermediate livery with blue ends and small yellow panels during overhauls at Eastleigh; the remainder getting blue with full yellow ends straight after green. Unit no.5604 was the last to run in green livery, being repainted blue about May 1971.

These 2 SAP units were used mainly on SWD suburban services, being intended for the Cobham line, though odd units still worked on CD and SED services from time to time. However, all reverted to 2 HAP by May 1970 except unit no. 5622 which had reverted back earlier in about October 1969, having been displaced by new 4 VEP unit deliveries.

These units became Class 412 under the initial BR TOPS classification system in 1972, being revised to Class 414/1 in 1975. After displacement from the SWD, the first nineteen units were concentrated at Brighton (Lovers Walk) depot with the remainder working from Ramsgate. From May 1972, all units were allocated to Brighton depot for use on the Coastway services where they remained until May 1976. 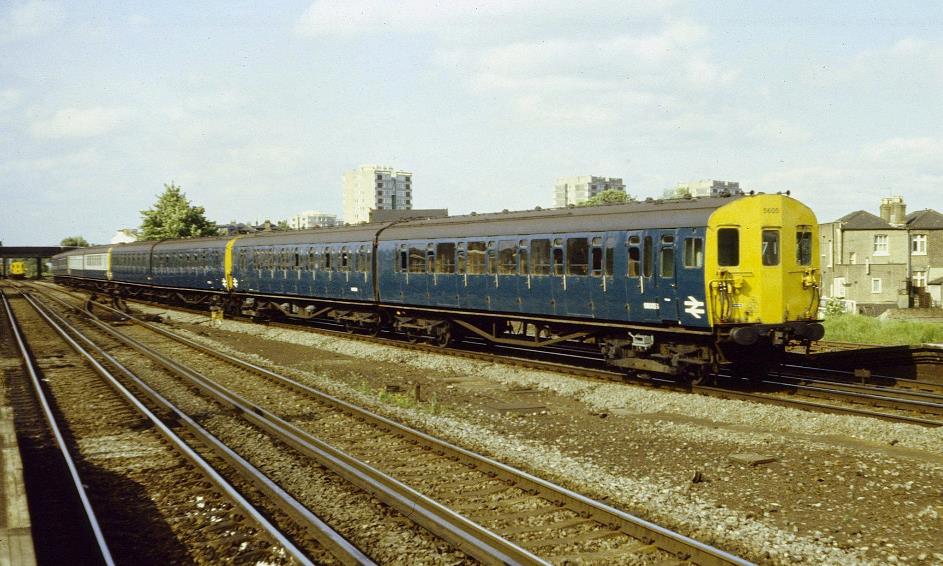 Units nos.5601 and 5636 were disbanded in March /April 1976 and their DTCs withdrawn, and the MBS vehicles were used along with two former 4 SUB trailers to form a ‘new’ 4 EPB unit. One of these coaches was the subject of a ‘facelifting’ experiment and was fitted with fluorescent lighting, a false ceiling, re-profiled seats, public address system and improved draught-proofing. The remaining thirty-four units were downgraded to 2 SAP with the same seating arrangements as the earlier conversions, and reallocated to Selhurst depot for use on CD suburban services from 20th April 1976.

Picture frames in their compartments were also removed at this time. However, express gear ratio motors were retained. Units began to be repainted into blue/grey livery in 1975 but not all were done before being disbanded. Two further 2 SAP units were disbanded in October 1977 and their MBSs used to form a further 4 EPB unit 5264 to replace unit 5047 lost to collision damage.

A programme for facelifting all the SR type EPB stock started in 1980 and it included the MBS vehicles of thirty of the remaining thirty-two 2 SAP units, which were to be used with converted former 4 SUB trailers to make up sixteen further 4 EPB units. However, the DTS vehicles were not included and were scrapped when the 2 SAP units were disbanded. Two units were also not included in the program, one being retained for departmental use and another (now non-standard with a BR type MBS) was disposed of for scrap.

Facelifted MBSs were identical to those of the EPB units, the central partition being removed and the seating capacity reduced to 82. Some early facelifted coaches retained express gear ratio, but later units were modified to suburban gear ratio; bogie exchanges during subsequent overhauls similarly modified the others. All that were facelifted were fitted with simplified AWS during this process. Diagrams for surviving 2 SAP units were progressively reduced as facelifted 4 EPB units entered service and by early 1983 few of these units were still working.

Unit formations were as follows starting with the unit number that the vehicle (car) donating the underframe last operated in (the vehicle number is prefixed with a U). ‘Week ending’ dates of new-unit release from Eastleigh works are shewn [Date Completed]. The units were all disbanded at Horwich works about the dates shewn and the DTS vehicle scrapped there shortly afterwards (unless otherwise shewn in the notes). 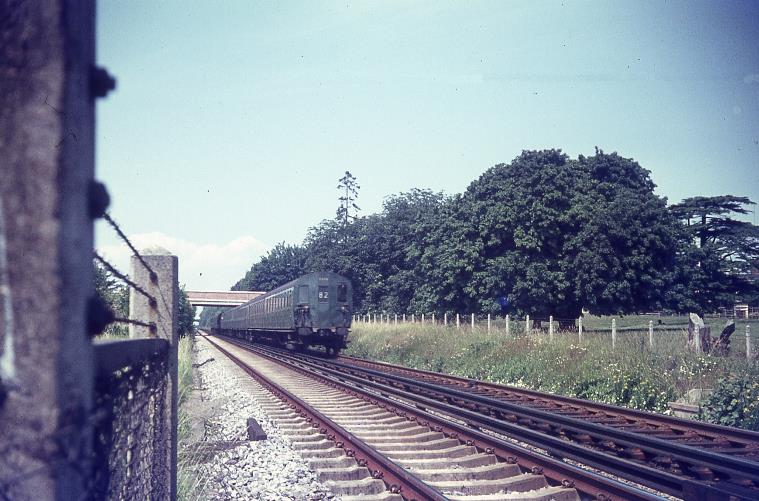 ALL TEXT AND PHOTOGRAPHS ARE COPYRIGHT