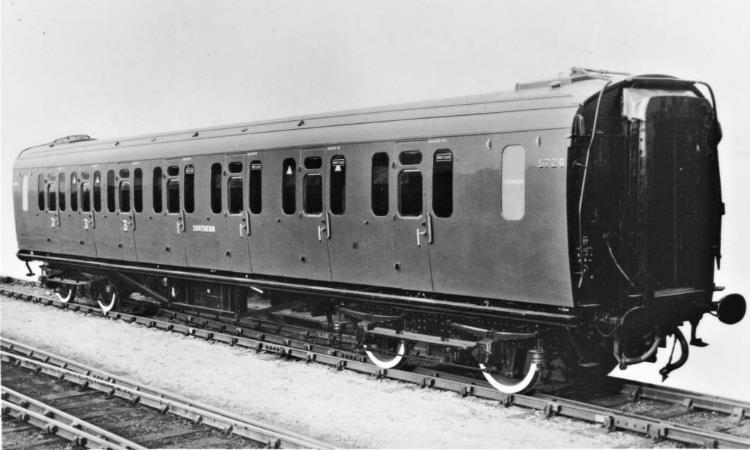 Following Bulleid’s succession to Maunsell on the Southern Railway, designs were started in 1938 for new coaching stock on the South Western Main Line from Waterloo to Bournemouth – Weymouth and Salisbury – Exeter routes. Although design work commenced in 1938 the order couldn’t be place until 1944 for eighteen number three-coach restriction ‘4’ sets (numbered 963 to 980) built on Maunsell-type 59ft underframes.

These underframes had been fabricated in 1940 but when WW2 stopped the construction of the coach bodies the underframes were placed into store which sadly set them up for corrosion in later life. The BTK coaches (nos.2841 to 2876) seated 40 no. 3rd class passengers; the CK coaches (nos.5709 to 5726) seated 24 no. 1st class and 24 no. 3rd class passengers.

In 1941 Bullied had introduced a bodyside profile on 4 SUB unit no.4101 featuring a new profile (with a continuous curve from floor level) and these coaches adopted that style. On the doors they also featured the characteristic lozenge-shaped toplights above the droplights; a particular useful feature for looking out when standing ready to leave the coach (the bodyside curve of the coach would not permit a deeper /taller droplight).

With doors for each compartment on the non-corridor side (following Maunsell’s coach-layout practice) they became known as ‘multidoor’ coaches; particularly after the later designs of Bulleid coaches employing saloons and compartments with vestibules entered service. This saloon /vestibule stock offered greater passenger comfort and ‘multidoor’ stock quickly found less favour with express services.

The date identified for each 59’ set formation (unless stated otherwise) is the outshopping of the last vehicle needed to form each set; this being the CK coaches. 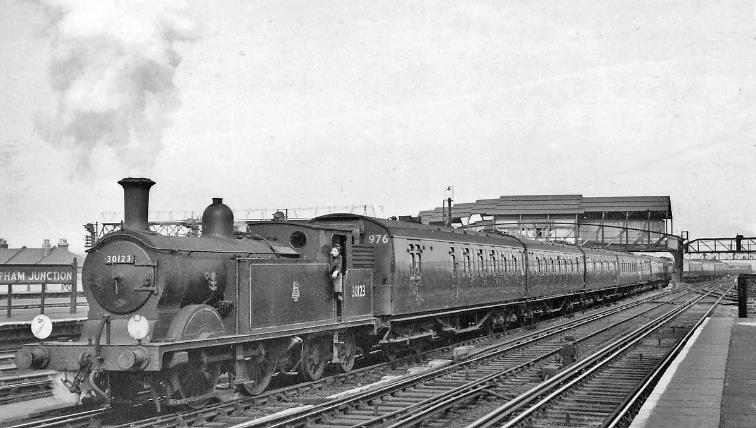 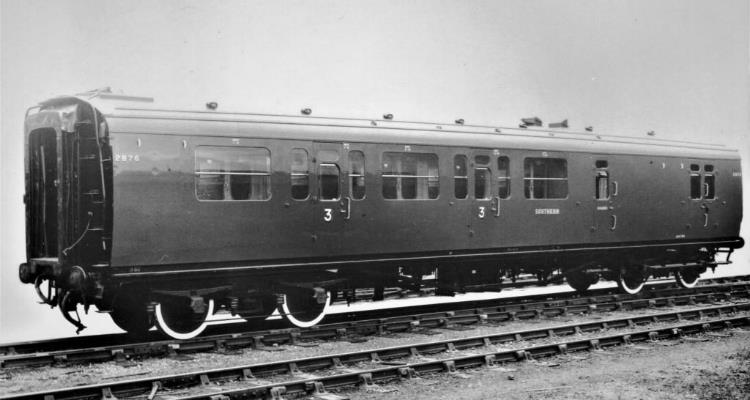 The 64’ Bulleid ‘multidoor’ stock initially spend some time on Brighton /Portsmouth – Bristol services before being concentrated back on SW main line workings. 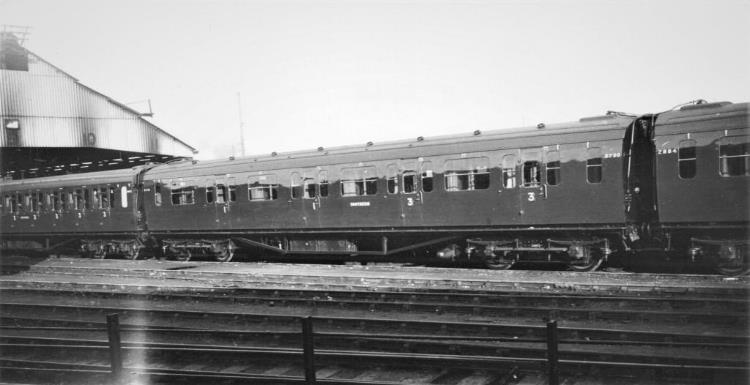 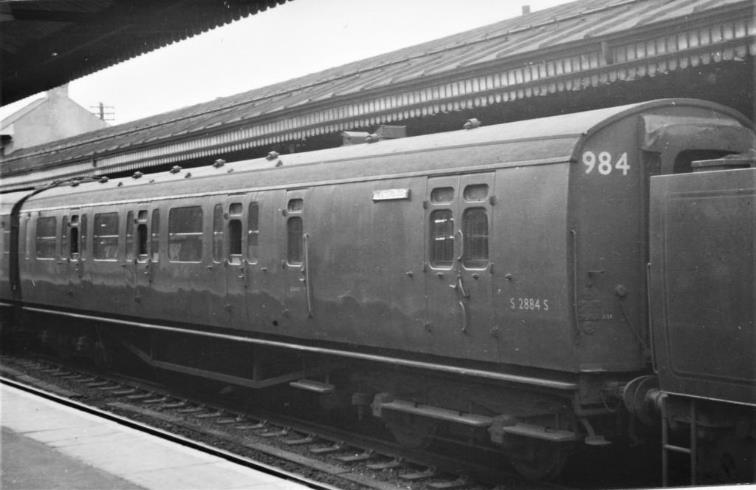 Towards the end of their working life all four 64’ sets were strengthened to eight-car using Bulleid and Maunsell coaches with the following information obtained from both the Lancing Works and CM&EE Record Cards for each set. The dates beneath each set indicate the formation of that set until withdrawal of its coaches; the set probably having previously been taken out of service.

NB - It should be noted that there are some discrepancies between these official Record Card and Carriage Working Notice formations and contemporary observations made by the Southern Carriage & Wagon Society (a group of rolling stock enthusiasts led by Laurie Mack from 1959 to about 1968). 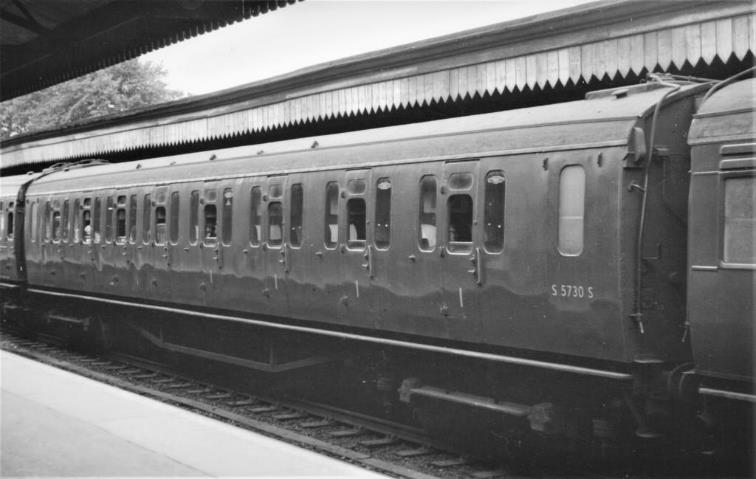 But CLC was not to last and many were rapidly repainted into BR(S) green way before their ‘due date’ (often when they had been scheduled for varnishing on the 2½-yearly varnishing cycle or even when in works receiving attention). Such was the impetus to repaint into green most Bulleid 59’ multidoor coaches only carried CLC livery for two to three years. Just one set managed forty-nine months in CLC; another was repainted after just seventeen months.

With few exceptions, fixed coaching sets were normally varnished /painted as a set and whilst in service would be subject to the same degree on weathering (etc). Accordingly, sets were often reasonably consistent in their condition. However, where sets were strengthened (for example for summer services) the additional coaches may vary in appearance. Although rare, some sets included mixed green /CLC stock and latterly at least one green Mk1 three-car set (no.551) was strengthened in September 1963 with ex-WR lined maroon stock until they could be repainted green.

There is much debate on SR ‘Malachite’ green and the somewhat limited number of colour photographs from that period cannot necessarily be relied upon (notwithstanding weathering /varnishing /fade /any differences in colour of paint batches etc.). In this respect Michael Welch’s book ‘Southern Coaches in Colour’ is worth referring to as it yields significant colour and tonal differences in photographs of both ‘BR green’ and crimson lake coaches. Colour-shade does matter but is a difficult subject.

Following nationalisation, the coach numbers had an ‘S’ prefix thence ‘S’ suffix added. However, the ‘Southern’ branding wasn’t necessarily removed (at least) until re-varnishing took place. The 1st /3rd numbering usually remained in place on SR malachite liveried coaches (by this time only select boat trains conveyed 2nd class passengers) until 2nd class was abolished on Sunday 3rd June 1956 (after when 3rd class was renamed 2nd class). Accordingly, the number ‘3’ was usually removed upon re-varnishing /re-painting unless the coach had cause to visit Lancing Works. On the SR-liveried ‘multidoor’ composites the number ‘1’ is not located centrally on the door; photographic evidence supports this positioning.