During October 1951 the first of a new type of 4-car suburban unit was completed at Eastleigh. Numbered 5001 it was constructed on reconditioned underframes from Lancing. The building continued until 1957 when two-hundred & thirteen units had been completed, these being numbered 5001 - 5053 & 5101 - 5260. Overall dimensions and internal layout were very similar to contemporary 4 SUB units. However, units were fitted with a self-lapping electro-pneumatic brake in addition to the Westinghouse automatic air brake fitted to all earlier electric multiple units, this led to the unit designation ‘4 EPB’.

Externally the units closely resembled the 4 SUB units still being constructed, except at the unit ends where the cab and brake area were redesigned. In order to reduce draughts, the cab had no external doors, the driver entering via the guard’s brake. Sliding side windows were fitted along with a roller blind route indicator replacing the opal glass and stencil arrangement of earlier units. The route indicator had two main apertures capable of showing a single number each, these were surmounted by a horizontal aperture fitted with a blind capable of showing different lengths of bar or dots as appropriate.

Buckeye automatic couplers were fitted at unit ends, above which was a Pullman type rubbing plate, the side buffers provided being usually in the retracted position out of use. The buckeye could be lowered revealing a central drawhook; this being used with the side buffers for coupling to non-buckeye fitted stock or locomotives, although the units could only run in multiple with buckeye fitted stock. High level air pipes and 27-way control jumpers were provided, so staff did not need to go between units at track level to couple and uncouple them.

Units were close-coupled within, using the standard suburban centre-buffer and three-link chain arrangement: this being bolted with shackles underneath the headstock (keeping the centre-buffer under compression). On cab ends there was the usual central drawhook with side buffers. The driving trailer had a centre buffer whilst the motorcoaches had a rubbing plate.

With suburban gear ratio, the units had a balancing speed of 63 mph on level track and the maximum permitted speed was 75 mph. A motor-generator (MG) was fitted to each Motorcoach which provided current at 70 volts for control and lighting purposes and charged the batteries carried on each Motorcoach (which provided current for control and emergency lighting for a limited period when the traction current was not available). Each Motorcoach also carried a Westinghouse DH25 air compressor for the air braking supply.

The internal layout of the units was similar to the main batches of 4 SUB units with two eight-bay saloon Motorcoaches each seating eighty-two, a 10-compartment trailer seating one-hundred & twenty and a 10-bay saloon trailer seating one-hundred & two, giving a unit total of three-hundred & eighty-six. Motorcoaches had the gangway offset to the opposite side compared with 4 SUB motorcoaches, this being a result of different floor-trap layouts, the gangway being offset to the left when looking along the coach from the cab end. The saloon trailer had its gangway offset to the same side as the adjacent motorcoach. 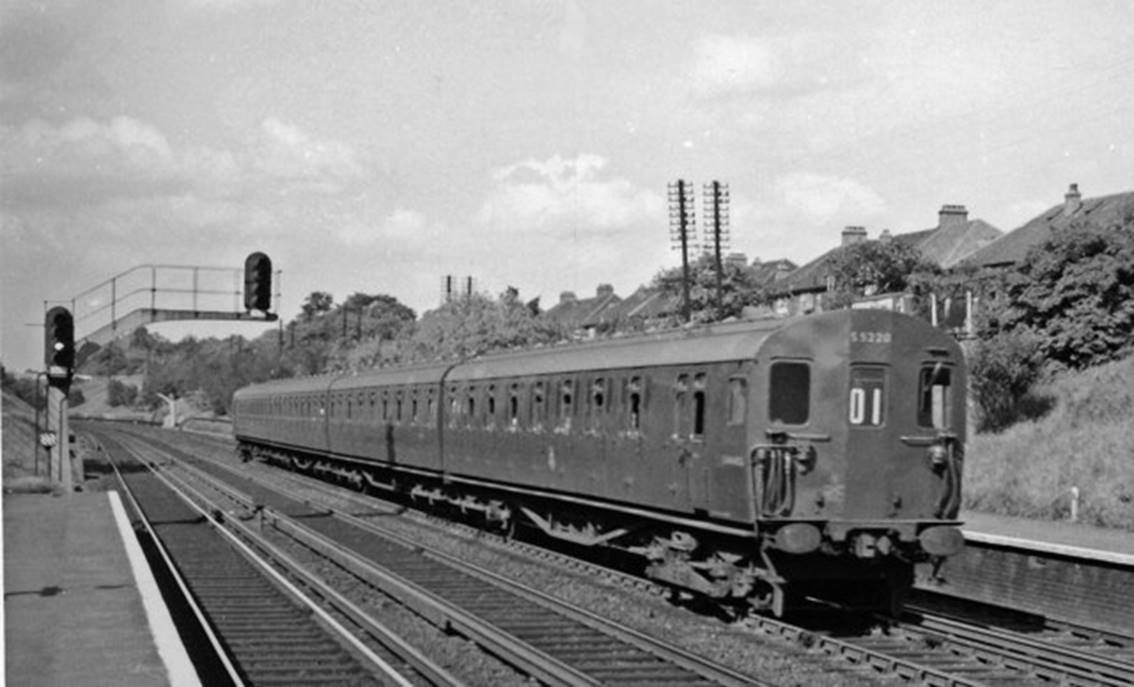 The 50xx units were ordered in three sub-batches, 5001 - 5015 to order number HO 3638 (this order included the last batch of forty-five 4 SUB units nos.4710 - 4754), 5016 - 5033 and 5034 - 5053 to order number HO 3756, units from no.5016 upwards having different interior fittings with plywood veneer side panels and white plastic ceilings and modified luggage racks with an upwards extension to anchor them to the ceilings; the first fifteen having identical interior fittings to the last built 4 SUB units from no.4735 upwards (i.e. cream coloured ceilings and rexine covered side panelling). The cabside ventilators on unit nos.5016 upwards (above the drivers sliding side light) were also to a modified design.

The compartment trailers of nos.5001 - 5033 were modified vehicles removed from ‘augmented’ 4 SUB units; those in nos.5034 - 5053 were new. The saloon vehicles were new bodies mounted mostly on reconditioned underframes, though a few were new underframes. The first nine units were all completed with their cars numbered onwards in the 4 SUB series but all were altered prior to the units entering traffic (nos.5001 & 5002 at Selhurst, the others before leaving Eastleigh works).

Units from no.5118 upwards had the whistles mounted horizontally (not vertically) and those from no.5138 upwards had cantrail rainstrips and no bodyside MG air intake grille on motorcoach bodysides (earlier units later had this panelled over during overhaul) as this was found to allow water to get into the MG causing flashovers.

Units from number 5186 upwards did not have a duplicate jumper set on the cab end and unit no.5216 upwards again included a compartment trailer modified on removal from withdrawn ‘augmented’ 4 SUB units. Unit numbers 5001 - 5050 & 5101 - 5104 were new with SR style seating upholstery; nos.5051 - 5053 and no.5105 upwards having a BR pattern, though many different varieties of seat coverings appeared later during overhauls.

With the exception of the ‘augmentation trailers’ converted from 4 SUB to 4 EPB operation, all the vehicles of these units utilised reconditioned underframes which had originally run under wooden bodied cars in the 3-car suburban fleet; these latterly having been themselves augmented to 4 SUB by the insertion of an all-steel trailer. Many of these frames were originally newly built at Lancing. However, the batch which had been constructed at Ashford were also utilised, with some small dimensional differences between these and the Lancing product being eliminated during their reconditioning at Lancing prior to the 4 EPB bodies being constructed upon them.

Disposal of the wooden bodied vehicles took place mostly at Newhaven though some earlier ones were broken-up at either Horley or Lancing works; their underframes were taken to Lancing, partly dismantled, overhauled and rebuilt with additional strengthening. Underframes were then moved to Eastleigh where the new 4 EPB bodies were built onto them. A few of the underframes came from 2 NOL units; in a few instances former Motorcoach frames were used under trailer cars, although the reverse did not happen.

About fifty-five units were required on the SWD, initially unit nos.5001 - 5053 & 5101 - 5104 but subsequent deliveries displaced the ‘Eastern’ bogie fitted nos.5001 - 5053 batch to the SED from the highest numbered downwards until the SWD had unit nos.5101 - 5155. 4 EPB units took over the Hounslow Loop service for a while to release 4 SUB units to cover for 2 NOL units being modified at this time with the fitting of compressor governors.

The influx of 4 EPB units onto the SED enabled a start to be made with the ‘10-car scheme’. This scheme also required the delivery of the BR pattern 2 EPB units to run in conjunction with the SR type 4 EPBs and was introduced in stages as engineering works were completed on the routes concerned. The first phase was ready in June 1954 when the Charing Cross to Dartford via Bexleyheath, and Orpington & Bromley North routes were turned over to 10-car trains in the peak hours. This was followed in June 1955 by the Sidcup route to Dartford and operation on some Caterham & Tattenham Corner services.

The next stage was inaugurated from the 11th June 1956 involving the Woolwich and Greenwich lines to Dartford and the lines onwards to Gillingham, the final stage was ready in April 1957, this clearing the lines into Cannon Street and the Mid-Kent and Sevenoaks lines. On completion of the 10-car scheme, 132 units were required on the SED and 10-car trains were all diagrammed to be formed of two 4 EPB and one 2 EPB unit, though trains with one 4 EPB and three 2 EPB units were not uncommon.

Ten new units delivered early in 1956 had gone to the Central Division for the Caterham & Tattenham Corner lines where 10-car trains were operated between London Bridge & Purley where they split into two portions. The allocation on the SWD had also risen to about 75 by the time all the units were in service.

Electrical codes, first used on new Kent Coast stock were allocated to all EPB vehicles from about 1963. 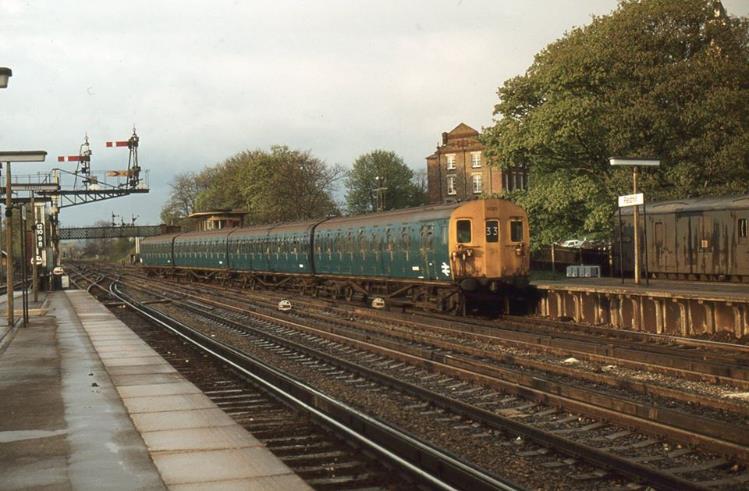 All units were delivered with the unit number preceded by an ‘S’ and a larger gap the usual before the first ‘5’ digit of the unit number, these were removed at first repaint and the 4-digit unit number centralised on the cab front. Unit nos.5001 /5002 /5006 & 5007 were delivered in a lighter yellowish green livery, all others being in early BR(S) green.

Unit no.5048 was subject to trials with yellow warning panels and full width panel below cab windows applied c. January 1962.

Units painted in the intermediate livery of blue with blue ends in 1966 were as follows (all eventually gained all blue with full yellow ends, and later all were painted blue /grey):

A large number of units had full yellow ends applied whilst still in green, these being:

Unit no.5218 was the last SR unit to run in normal service in green livery and was repainted blue in January 1972.

Of the facelifted units numbered nos.5401 to 5497 the Network SouthEast livery was the later version (darker blue with curved upsweeps).