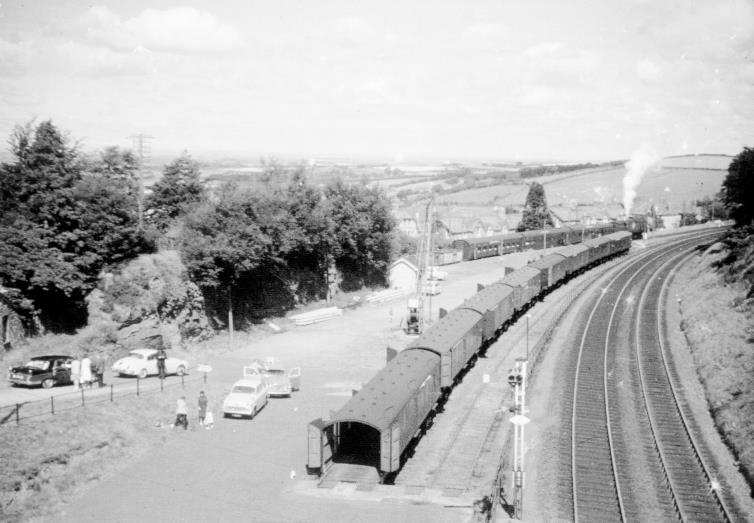 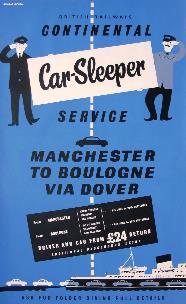 The first service to convey both motor cars and their driver /passengers on the same train commenced in 1955 operating between London and Perth; this Car-Sleeper service being operated by British Railways’ Eastern Region. In 1958 this was joined by the Continental Car Sleeper train from Manchester to Boulogne operating across Southern Region metals via Dover. 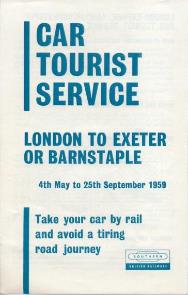 Prior to the Okehampton Car Carrier, a Monday to Friday service from London to Exeter and Barnstaple had been offered with motorists leaving their motor car at Nine Elms Depot (thence train from Vauxhall in order to catch one of several designated Waterloo – Exeter /Barnstaple services). Loaded /unloaded by railway staff, passenger’s motor cars could be picked up from Exeter Central the next day (Tues – Sat) after 9.0 a.m at Exeter or 10.15 a.m. at Barnstaple Junction.

1959 was the last year of the Car Tourist Service from London to Exeter & Barnstaple. 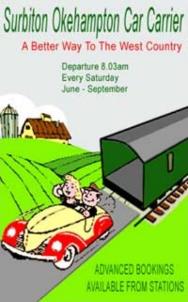 The daytime Surbiton to Okehampton Car Carrier service came about following a Southern Region managerial request for service improvements. The (then) Okehampton shed foreman, Arthur Westlake submitted the idea for a car-carrying service with passengers accompanying their cars on the same train; this plan included the efficient working of stock. Management adopted the plan with Arthur Westlake being paid two guineas for his idea. 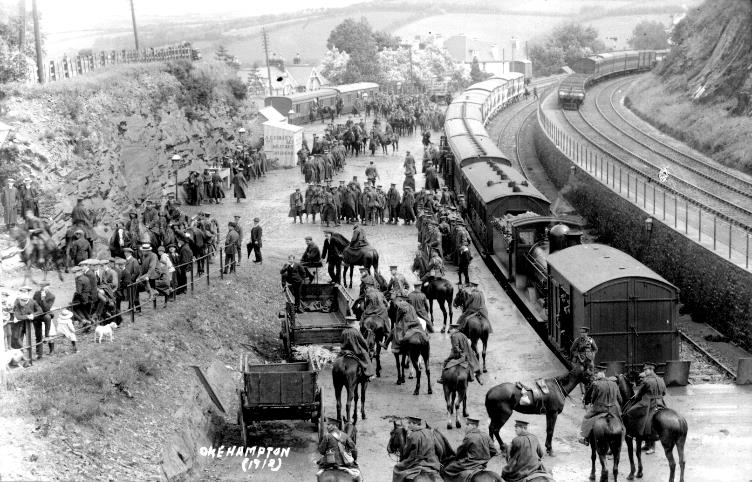 Running Saturdays-only June to September, the summer 1960 timetable shews the Down train leaving Surbiton at 8.03 a.m. arriving at Okehampton 12.28 pm with the three passenger coaches placed at the rear of the train behind the GUV vehicles.

The fare for a driver and car was £20 (plus £4 13s for additional adult passengers). Packed lunches were available at Surbiton.

Examples of packed meals in a carrier bag.

At Surbiton, motor cars were end-loaded via the carriage dock in the Down (coal) yard with passengers (including motorists) boarding the passenger section of the train in one of the adjacent sidings (steps provided). The train engine then attached the vans in front of the coaches and the complete train departed for Okehampton where the train was similarly divided and shunted into the ‘military sidings’ located off Tors Road (Up side to the south-west of Okehampton station) for unloading /loading; motor cars being driven forwards off and onto the train’s GUV vehicles.

These end-door equipped GUV vehicles were equipped with plates to bridge the gap between each and onto the end-loading ramp. The first motor car loaded would be driven the length of the GUV vehicles to become first off at the train’s destination; last on would be last off.

The return Up working left Okehampton at 3.55 p.m. reaching Surbiton at 8.11 p.m. (with the GUV vehicles at the rear of the train) although with shunting across to the Down side and the subsequent unloading, motorists could not expect a rapid ‘getaway’ – particularly those who were last to be loaded at Okehampton.

Having disembarked onto an up-side station platform at Surbiton, it was not unknown for some motor-car passengers to make their way home by public transport and put the kettle on in anticipation of their motor-car driver’s arrival with their vehicle! 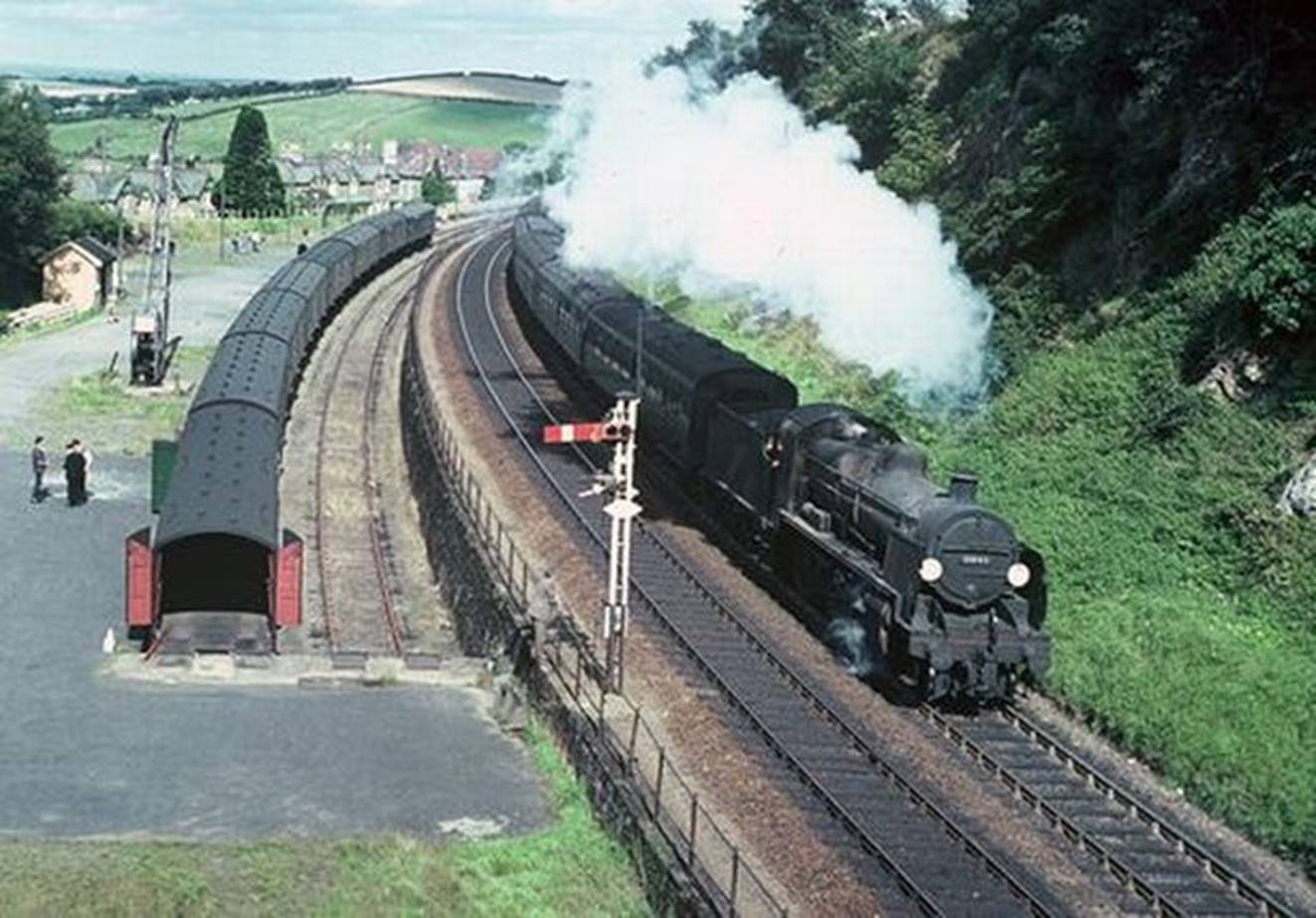 Following the 1962 Transport Act, disbandment of the British Transport Commission and Dr Beeching’s drive bring the railways back into profitability through his 1963 report ‘The Reshaping of British Railways’, there was an imperative to identify and develop profitable traffics with loss-making or only marginally profitable to either be reorganised with realistic pricing else withdrawn. Certainly, the Okehampton Car Carrier service was labour-intensive, its stock-utilisation low and was unlikely to fit in with plans for the ‘modern’ railway’s nationwide car-carrying services.

Offering services from 1965 from Kensington Olympia to St. Austell & Penzance (along with many other destinations across England & Scotland), British Rail’s Car Carrying Service (shortly to be branded ‘Motorail’) was now seen to be the way forward. 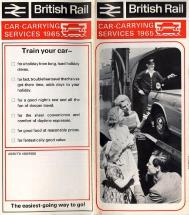 BR’s 1965 Car Carrying Service advertised:
‘Go the day before and spend the night in an hotel. Or go the same night by sleeper.’

The Surbiton to Okehampton Car Carrier service was arguably one of several forerunners of ‘Motorail’ (the name ‘Motorail’ appears to have been in use before it was officially adopted in 1966 when the purpose-built Kensington Olympia terminal was opened).

Initially using GUV vehicles; these were reassigned to parcels & newspaper traffic as ‘Motorail’ replaced them by ‘Carflats’ built from withdrawn Mk1 coach underframes at Swindon. This including WR non-corridor Mk1 vehicles some of which had been introduced by the SR for its Exmouth branch services). However, the GUV vehicles did reappear in later years in part because their covered nature protected motor cars from damage and vandalism (particularly sone-throwing) en-route. 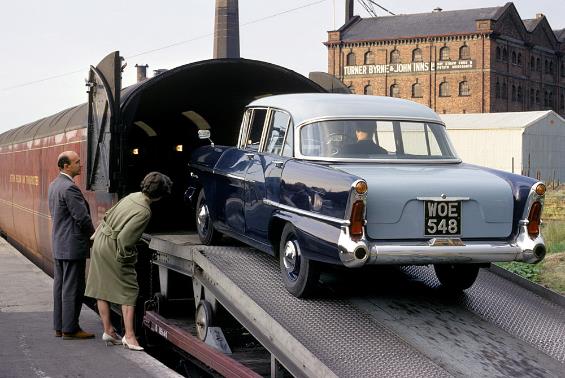 The Eastern Region had previously built (in 1961) some double-decked car-carrying vans for Anglo-Scottish services; these being coded TCV ‘Tiered Car Van’ under TOPS.

Unfortunately, as the UK motorway network expanded and car performance improved, motoring journey times were shortened. Furthermore, the new High-Speed Train reduced rail journey times and cheaper air flights meant overseas holidays were becoming more affordable. As the economic case for ‘Motorail’ diminished and despite expansion up to and including 1972, route closures commenced from 1975 with the operation started making a loss in 1989 leading to the cessation of services in 1995.

There was a 1996 car-carrying scheme on the London to Penzance ‘Cornish Rivera’ sleeper train. Initially a success, the carriage of cars ceased at summer-end in 2006. 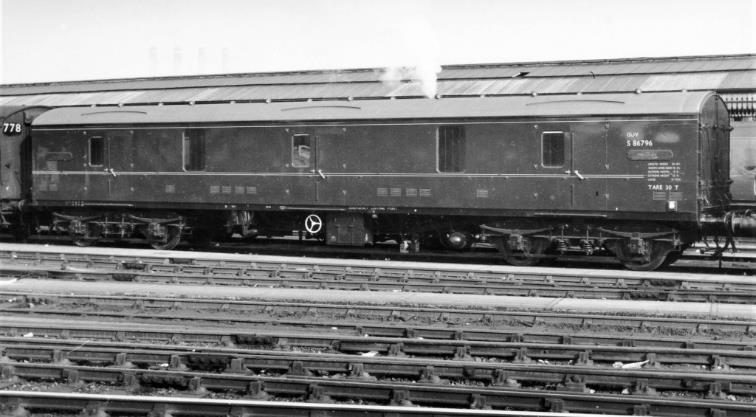 Stabled at Farnham during the week, the SR Western District CWN for the Summer of 1960 shewed the train initially used seven BR Standard GUV vehicles. Capable of carrying three motor cars each, these had the vehicle end loading capability and were fitted with wheel bars for securing road vehicles. Once loaded the motor cars were held in position by a securing bar across the front and rear wheels of each.

The GUV vehicles were built by Pressed Steel to lot no.30565 /diag. no.811 and (in lined-maroon livery) were delivered to the Southern Region by October 1959; the Southern’s allocation of GUV vehicles being in the number range S86707 to S86834.

Whilst the Summer 1960 Appendix to the CWN shewed only SR-allocated GUV vehicles, none were specifically reserved for the Surbiton - Okehampton car-carrying service. This CWN did not identify any GUV vehicles being loaned to the SR from other regions.

BR standard 3 Cor set 564 had been formed at Eardley on 15th February 1957 and had just been outshopped from an A2 exam at Lancing on 18th May 1960. Although in green livery, records do not shew it as carrying UIC First-class cantrail bands on the CK.

Seven GUV vehicles formed the van portion of the train; with no guard’s accommodation in these vans, they were marshalled between the locomotive and three passenger coaches.

Page 255 ‘West of England Car Carrier – The Saturday car carrier service between Surbiton and Okehampton is being well patronised and loadings are close to its capacity of twenty-one cars, conveyed in seven new GUV vans with standard 3-coach corridor set 564 for passenger accommodation. At Surbiton cars are loaded at the carriage dock in the down yard and motorists board the passenger section in one of the adjacent sidings. The train engine (35029, duty 8, on the inaugural journey of 18th June) then attaches the vans in front of the coaches and the complete train departs from the yard at 8-3 a.m. On the return journey (34050, duty 7, on 18th June) passengers alight at Surbiton station, meanwhile a Guildford Mogul has been attached to the rear of the train to shunt it across to the down yard for unloading; this engine subsequently disposes of the empty stock to Farnham if Surbiton cannot accommodate it’.

Page 311 ‘West of England Car Carrier – With reference to the note on page 255 (August R.O) a description of the procedure at Okehampton may be of interest. On arrival from Surbiton the train, normally worked by a light pacific from Exeter (duty 574), runs through and stops just west of the station. The Okehampton pilot then attaches to the rear and, after the pacific has uncoupled, draws the complete train back into the up platform road. The train is then shunted forward into the loading bay on the up side west of the station, where passengers and cars are disembarked; meanwhile the Pacific goes on shed to turn for the return journey’. 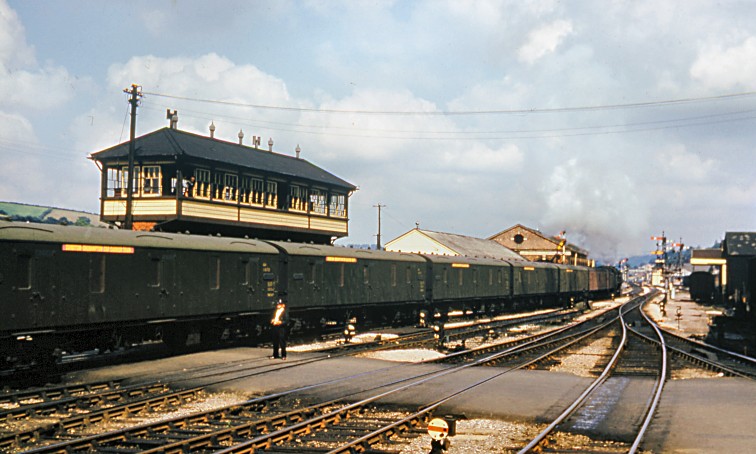 That the GUV vehicles changed each year suggests a significant number (at least) of these vehicles were repainted by the SR into Green livery; those used on the Okehampton Car Carrier possibly being selected from early repaints.

Coach no. S4443S (BSO) was an ex.SE division boat services vehicle. The Kitchen Second (RS) S7886S had formerly running as a part of Bulleid 6-set 295 but had now been displaced by one of the new Mk 1 RB vehicles.

The train was now authorised to run peak-Fridays and Sundays. However, the Friday trains were lightly loaded and most of the Sunday trains were cancelled due to lack of demand. When it did run on Sunday 13th of August 1961 only four motor cars were carried. 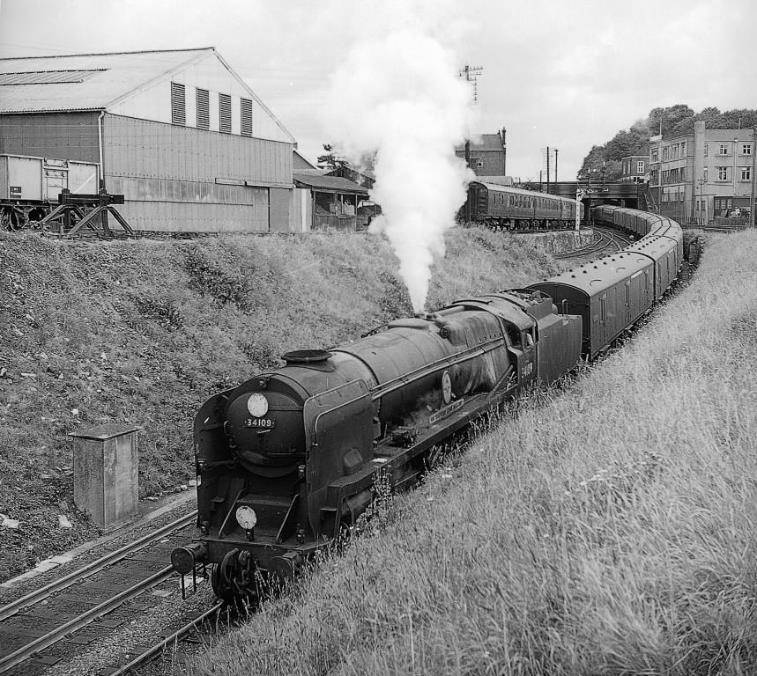 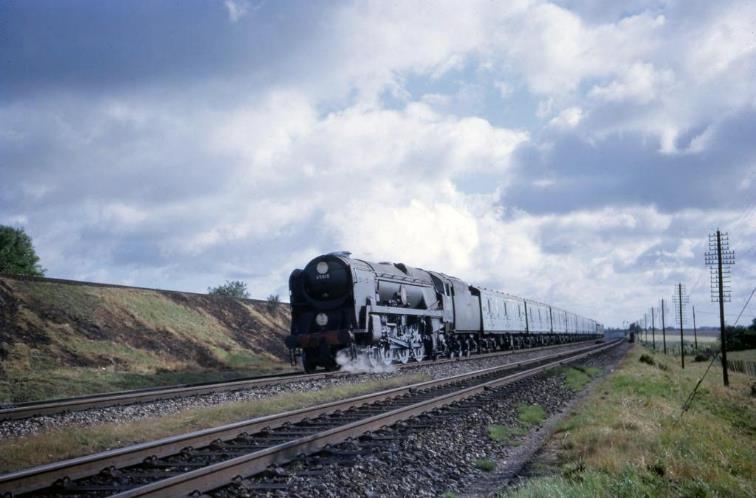 In 1962 3 Cor ‘H’ set 864 had been reduced to a 2-set for use on ‘The Royal Wessex’ service. This left Bulleid BSK S2529S ‘Loose’ and so available for inclusion in the Okehampton Car Carrying train. 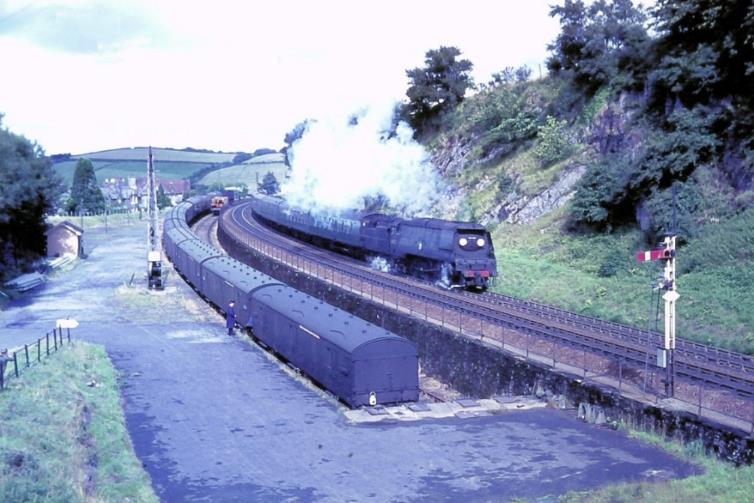 This was the last year of the Surbiton to Okehampton Car Carrier; ironically the first year it appeared in the public timetable. The formation is not recorded but probably unchanged since 1963. The last day of operation was Saturday, 12th September 1964.

On Saturday, 6th June 1964 the Okehampton Car Carrier was hauled by Hymek type 3 no.D7095 from Exeter finally arriving Clapham Yard (ECS) in the small hours of Sunday morning. This suggests it undertook the necessary shunting at Surbiton and it was quite possibly the stock was now being berthed in Clapham Yard (else the Hymek crew were simply unable to take the stock to Farnham from Clapham Yard).

The following formations have been identified but may not be fully inclusive.

The following GUV vehicles have been identified but may not be fully inclusive.