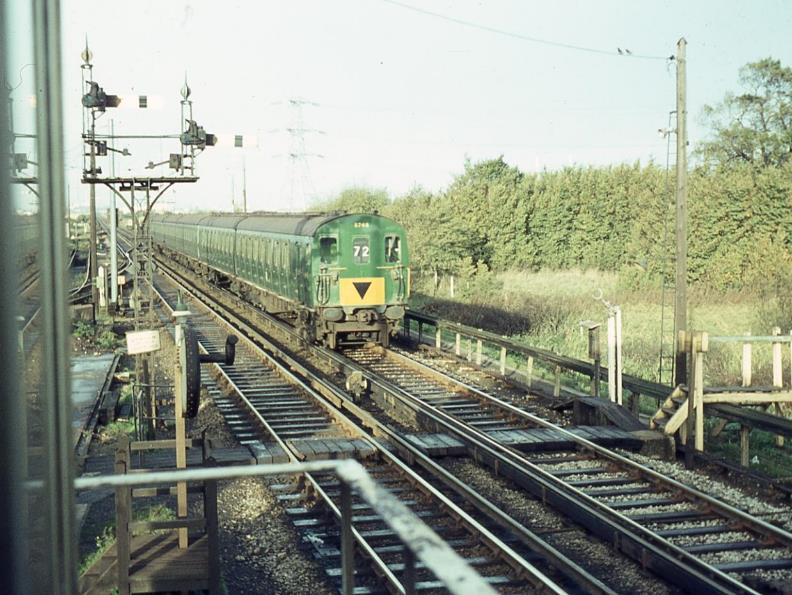 The first BR design 2-car suburban units were ordered on 29th April 1953 and began emerging from Eastleigh works early in 1954 and were numbered from 5701 upwards. These units were constructed on BR standard 63' 5" underframes from Ashford and mounted on new BR Mark 1 bogies. Eighty units were built, mainly for use with 4-car units on the South Eastern division to enable the inauguration of the ‘10-car scheme’ on that division; this being an attempt to ease serious overcrowding. However, other units were diagrammed singly on the South London & Wimbledon ‑ West Croydon shuttle services and pairs of units were sometimes used to cover 4-car sets.

Unit no.5701 was delivered in December 1953 and ran trials including passenger services over the South London line from March 1954. The first phase of the ‘10-car scheme’ was operative from 13th June 1954 using units nos.5701 – 5711. Single units started working on the South London and Wimbledon - West Croydon lines from 20th September 1954 following delivery of units up to no.5719; further units (up to no.5727) followed shortly after.

Once all units were in service the nominal allocation of units was ten to the Central section (two Wimbledon - West Croydon, three South London line and five for Tattenham /Caterham line 10-car trains) with two spares; units nos.5701 - 5712 being the nominal allocation to the Central section. The remaining sixty units were for the Eastern section 10-car workings.

These units were the first to be built to the new ‘BR Standard design’ and differed in appearance from the ‘SR type’ 4 EPBs with which they were to work, with a different bodyside profile, cab end details, doors with a single droplight (no oval light above the droplight) and many other detail differences. However, the overall concept was very similar and many later coaches, some for other regions and non-corridor loco-hauled coaches followed the basic design pattern of these vehicles.

The units comprised a motor brake second, seating 84 in two 4 bay saloons and a driving trailer second seating 102. The MBS had the driver’s cab, entered via the adjacent guard’s brake, then the passenger accommodation. Each 42 seat saloon had a full width seat for six at each end, with three sets of free standing back-to-back seating between, that on the offside (when cab of MBS leading) seating three aside, whilst the nearside ones were two aside.

The DTS had the driver’s cab, entered from a full width entrance vestibule, a further four bay 42 seat open saloon, and five full width compartments with six‑a‑side seating. In this coach the three aside seating was nearside (when cab of DTS was leading) so the gangways were offset to the same side in both coaches of the unit. 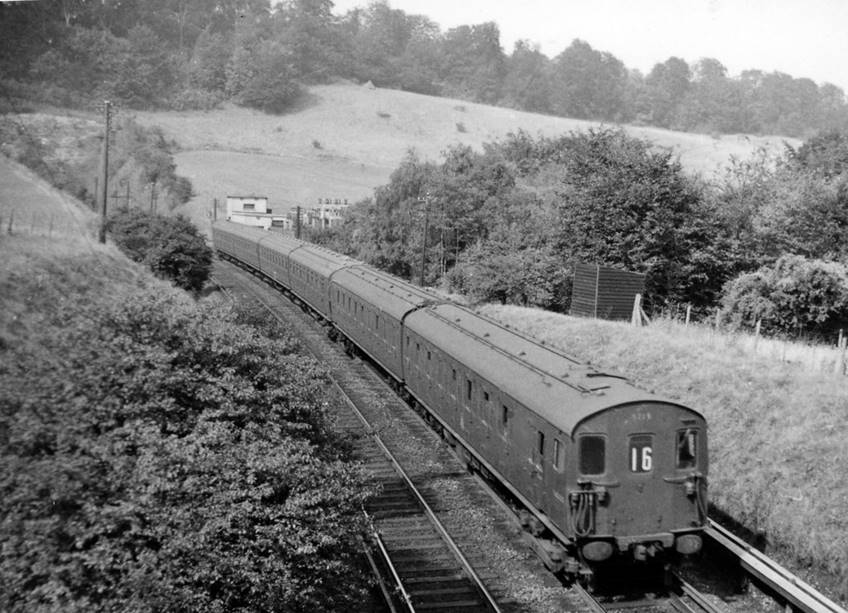 It was intended to couple these vehicles with an intermediate buckeye coupler. However, after the first was completed, it was found that the unit length would cause problems at certain ‘tight’ locations so the centre buffer and chain three link coupling (as used on the ‘SR type’ 4 EPB units) was substituted thus shortening the overall unit length by 8" to 132' 8½". Only the underframes of the first eleven units were built to accommodate buckeyes.

Situated at the end of the unit under the driver’s cab on the motor coach, the motor bogie was equipped with two EE 507 250hp motors with suburban gear ratio, the trailer bogies having plain bearing axleboxes.

Electrical equipment of the ‘1951 type’ was supplied by EE. When delivered, both vehicles were classified as third class, though they became second from 3rd June 1956 and are shown as MBS and DTS in these notes though their initial classification had been MBT and DTT.

Whilst these units were under construction, a batch of fifteen similar units ordered at the same time as the first eleven BR(S) units, were also being constructed at Eastleigh for use on Tyneside, and the motor coach number series was broken after the first eleven SR units to accommodate the fifteen Tyneside vehicles, though the DTSs were numbered in a separate series. These ‘Tyneside’ units later returned to the SR and became 2 EPB units 5781 ‑ 5795.

Units from 5759 onwards had slight electrical differences in the motor coach, the ‘no current’ relay becoming a ‘no volt’ relay altering the MBS vehicle electrical code (which were allocated to all vehicles about 1963) from CQ to CQ‑1A. The first eleven units had MG air intake grilles on the bodysides of the MBSs though these were later panelled over and the first twenty seven units had a slightly different style of seating supports. Three units were loaned for a while to the SWD during 1956.

Unit no.5766 was destroyed in the St Johns accident in December 1957 and a replacement unit, (numbered 5800) was ordered 2nd February 1959 on authority of HOO No. 4572. The MBS was added to an order for 4 EPB vehicles; the DTS was a single vehicle LOT number.

Replacement unit no.5800 entered service 15th January 1960; this differed from the earlier units in being equipped with ‘1957 type’ electrical gear. Furthermore, it differed from all others by having the emergency batteries located under the DTS instead of the MBS, this coach weighing 31 tons rather than 30 tons of the earlier vehicles. As such it was the only BR-design /built 2 EPB not to have roof conduits. The MBS also differed by having an 8' 9" long brakevan (diagram 414) as opposed to the standard 2 EPB length of 8' 11½" (diagram 400). 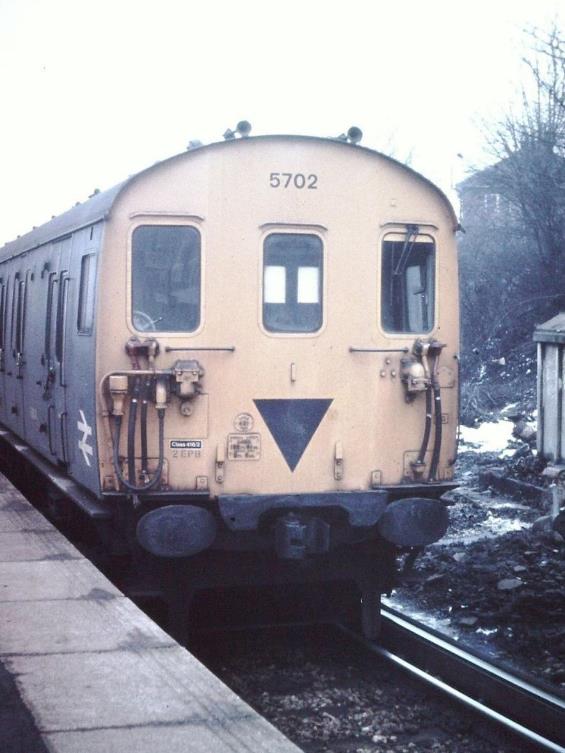 Lot numbers for these vehicles were as follows:

Around 1958 the 2 EPB units suffered bogie problems and a modification programme to upgrade them was undertaken during 1958; the rebuilt bogies now being classified as Mark 3D. Subsequently (from late 1986) all units progressively received Mark 4 bogies from withdrawn 2 HAP and DEMU stock, these were similar to the Mark 3, but had roller bearings.

Shortage of units during 1958 following the loss of unit 5766 and units 5705 & 5751 being out of use for damage repairs led to the temporary withdrawal of the units from the Wimbledon to West Croydon line, being replaced there by 2 HAL & 2 NOL units, the 2 EPBs returning by 18th February 1959.

Units began to be fitted with two-tone air horns from mid-1963, unit 5701 being the first in September 1963 during overhaul at Eastleigh.

Six units were disbanded during November 1964, their driving trailers being converted for DEMU operation and used as the driving trailers for the six 3R ‘Tadpole’ units for the newly dieselised Reading ‑ Tonbridge service. The spare motor coaches were used to replace accident damaged vehicles in ‘SR type’ 4 EPB units and used with ‘SR type’ trailers to form ‘new’ 4 EPB units 5261 and 5262. Subsequently, ‘1957’ unit 5800 was disbanded and its DTS used to reform one of the earlier disbanded units again. The units for ‘Tadpole’ conversion were all taken from the first batch of eleven units to facilitate the refitting of a buckeye coupler to the non-cab end of the DTS for DEMU operations.

Unit formations were as follows with completion date shown and new unit numbers with date renumbered as follows: 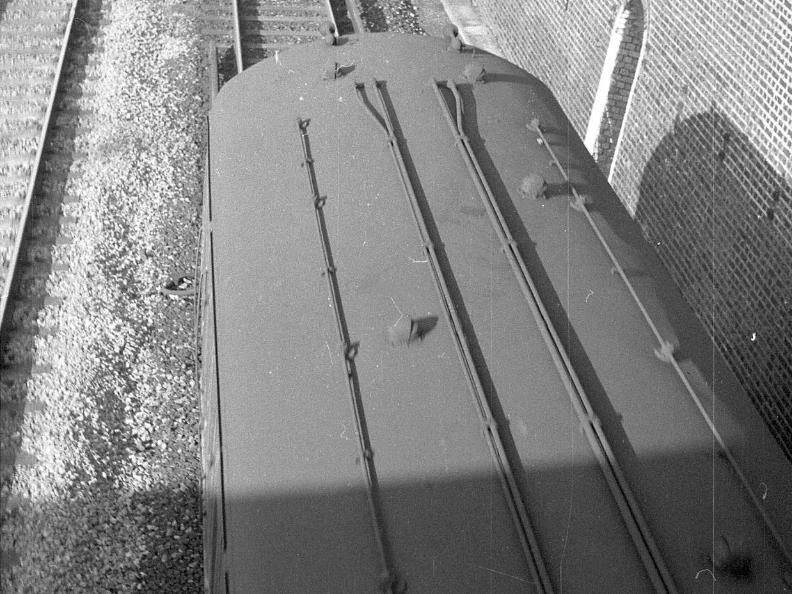 Units were used on all three sections of the Southern Region and routine maintenance was carried out at Slade Green (SE), Selhurst (Ctl) and Wimbledon Park (SW) with major overhauls carried out and Eastleigh and from 1961 running gear overhauls at Chart Leacon (previously these were undertaken at Lancing). Units were also repainted at Selhurst.

The allocation of units remained fairly static following the loss of the six units disbanded late in 1964. By 1972 (when depot allocations were introduced) units 5733, 5734, 5757 to 5760 and 5781 to 5794 were at Selhurst, 5752 to 5756 at Wimbledon Park with the remainder at Slade Green. The small number working on the South Western were supplemented the thirty four ‘SR type’ 2 EPB units on the Windsor/Weybridge services.

Allocations varied over the years, the ‘SR type’ 2 EPBs later moving to the Central section in exchange for BR types (including all the ex. Tyneside units) by 1978 leaving only 5752 to 5755 at Selhurst, with 5756 upwards at Wimbledon Park and the remainder at Slade Green.

From late 1978 all units were fitted with simplified AWS equipment; all being completed by about 1981.

Introduction of the new Class 455 units on the SWD and later on the CD displaced the 2 EPB units to the SED during the early 1980’s. 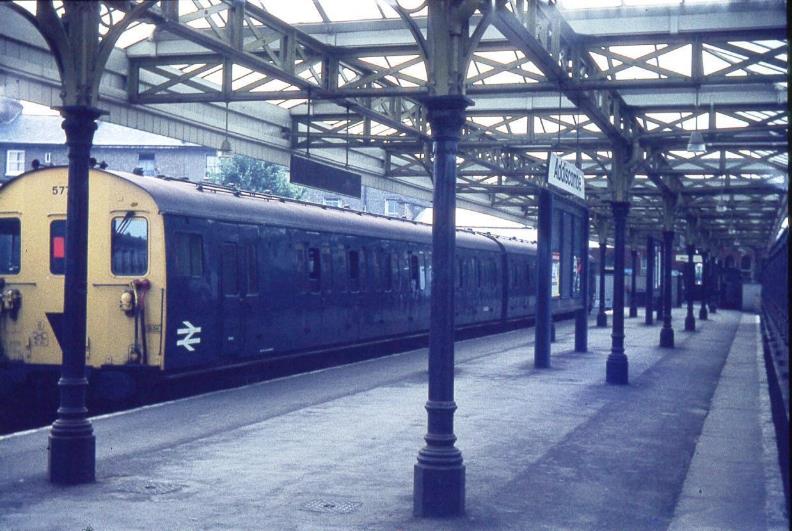 Units started to be painted all-over blue from July 1966 with unit 5763 being the first blue repaint at Eastleigh works with ‘paint date’ 1st July 1966; all receiving this livery complete with full yellow ends. The last units to run in green livery were 5742 and 5748; these being painted blue in July 1971. The following units had blue ends with small yellow panels when first repainted blue but were subsequently repainted again to standard: 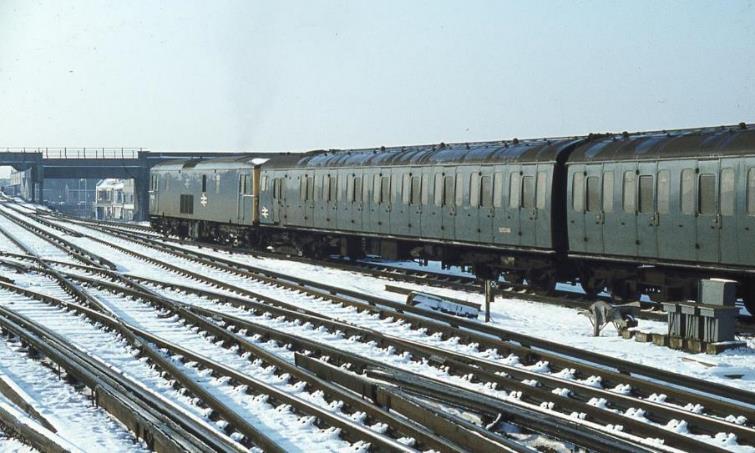 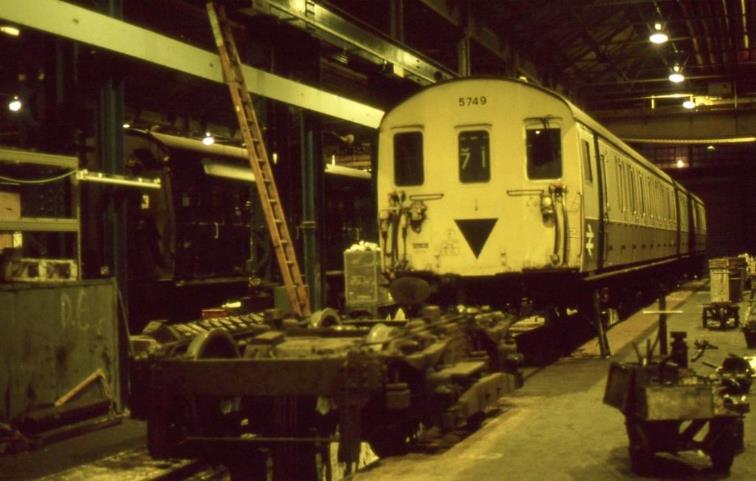 All units were fitted with simplified AWS equipment from late 1978, all being done by about 1981. Introduction of new Class 455 units on the SWD and later on the CD displaced units to the SED during the early 1980’s.

AWS equipment was fitted* /made operational# in these units as follows: 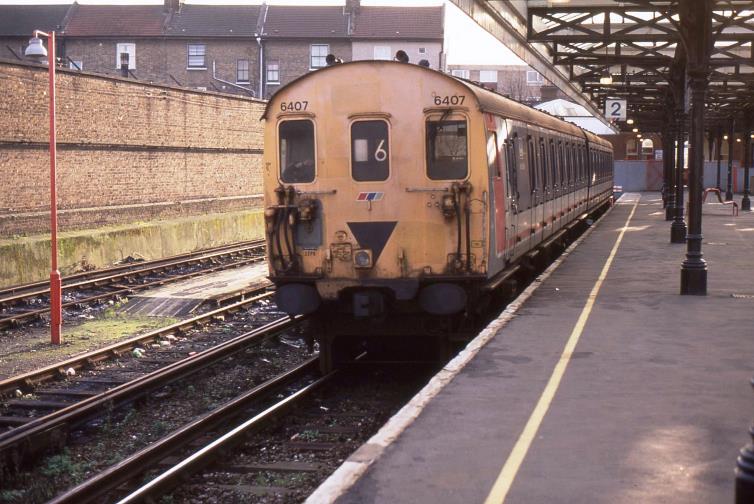 As with the 4 EPB units, a facelift programme commenced from June 1985, units so treated being reclassified class 416/4 and renumbered in a new series upwards from 6401 in order of shopping. Eighteen units were dealt with, the first nine later having detail modifications to assist guards with fare collection, these ‘Revenue Protection’ units (unofficially known as REV‑PRO units) being used mainly on the Strood ‑ Paddock Wood and Sittingbourne ‑ Sheerness routes where conductor guard working was employed.

Like the facelifted BR 4 EPB units, all passenger accommodation was now in open saloons, the motor coach now seating 82, the driving trailer 92. However, the RevPro units had additional internal doorways cut between the guard’s compartment and the passenger saloon, reducing the seating capacity to 80, and in the driving trailer, a similar doorway into the cab entrance vestibule, reducing the seating capacity to 90. The guard was able to ‘ring‑away’ the train from this cab vestibule, enabling him to restart the train from either end. Overall seating capacity of facelift units was therefore 174, reduced to 170 on the RevPro sets.

These units were fitted with improved draught proofing and heating, fluorescent lighting and PA system during facelift. Due to public disquiet over passenger attacks in compartment stock, the non-facelifted examples were restricted mainly to peak-hour services from April 1988, being shown in operating publications as 2 COM units, facelifted examples not so restricted being shown as 2 EPB (R).

From 1988, those units not facelifted and now shown as 2 COM units in operating publications began to have a red cantrail stripe added along the compartment section of the DTS to indicate the closed compartment section. Bogies were also changed with the oil axlebox type replaced by roller bearing ones recovered from withdrawn DEMU and 2 HAP units. Upon withdrawal, units were mostly worked to Bournemouth depot under their own power for some electrical stripping and component recovery before being hauled away to Gwent Demolition at Margam for scrapping.

Relatively few units were reformed over the years and a start on withdrawals was made on non-facelifted examples from mid 1991, the lack of any blue asbestos insulation in these units making them considerably longer lived than many of the later BR type 2 HAP and 4 EPB units. Units started to be withdrawn in numbers early in 1993 following the delivery of new Class 465 /466 ‘Networker’ units, the last 2 EPB units surviving into January 1995.

We have Dave Smith to thank for having the foresight to take these detail photographs back in the seventies. 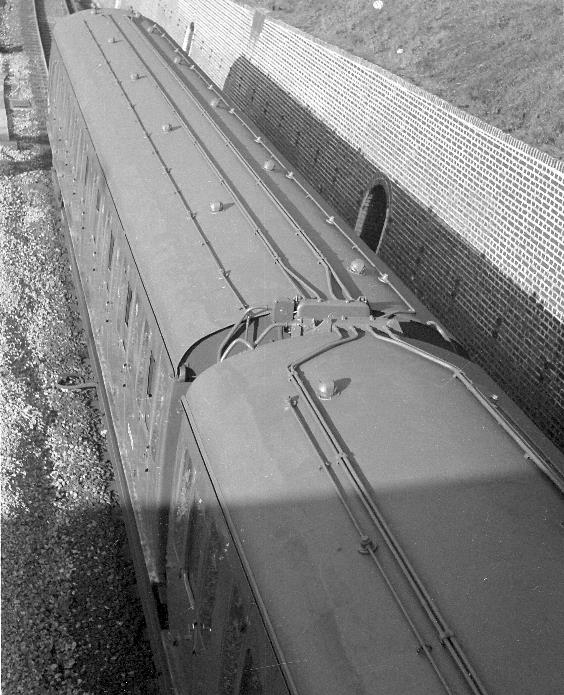 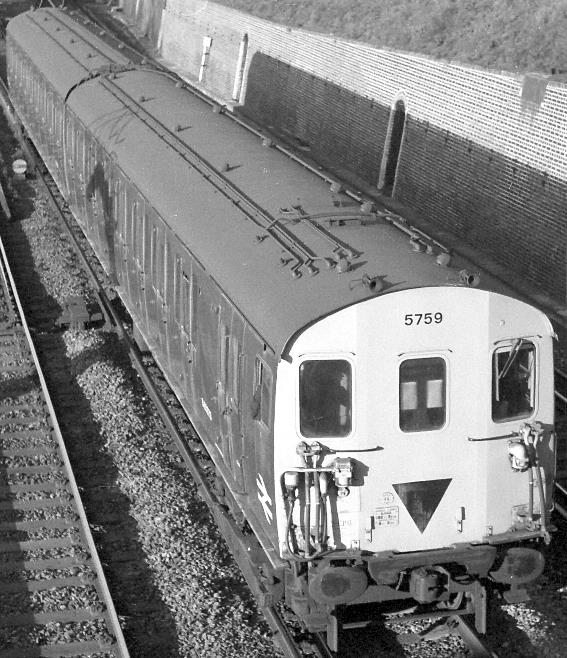 All the 2 EPB units were renumbered officially as 6202 to 6279 from 12th July 1984 and this was carried out quite slowly as the last unit was not renumbered until May 1985. This to accord with their BR Class designation as class 416/2 in order to clear the number range upwards from 5701 for the second batch of new 455/7 units then being delivered.

All surviving units were dealt with but eighteen units were further renumbered as 6401 to 6418 from June 1985 to January 1987 as they were facelifted and reclassified as Class 416/4.

Units surviving in traffic after 1st April 1994 were allocated to ownership of Eversholt train leasing company under the BR privatisation arrangements, these units marked with an ‘E’ after the 62xx number. 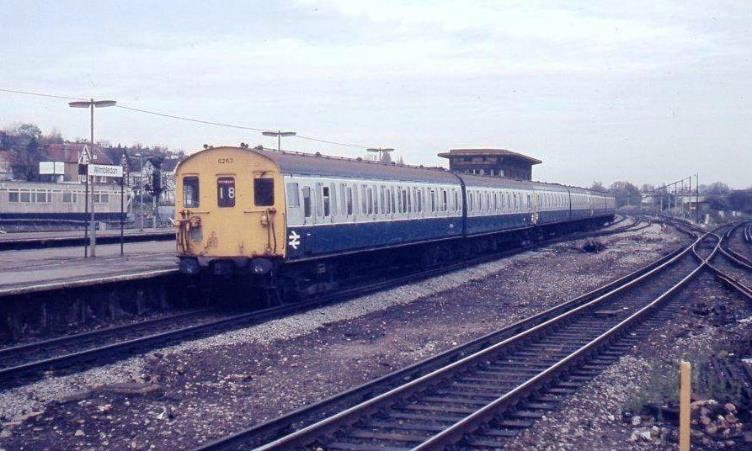 2 EPB no.6263 leads a 6-car formation into Wimbledon
© BloodandCustard